Although I don’t know well about other countries except a sea-girt country in the Far East, I can describe Christmas days in Germany in just one word, “still“.


On 24th in Munich, there were so many people in town until 2pm, the time when all shops, especially, supermarkets close. Children with their parents, old couples, and young people sent by their family as a “PASHIRI”, all of them were shopping some groceries to survive following consecutive 2-day Christmas holidays, 25 & 26th, and were of course also getting a lot for their family X’mas party.

After all the shops closed and all the people went back home, the fog was coming, and the sun went down at around 5 pm. Then, silence encompassed whole town with very deep fog.

The atmosphere I felt on the way home from empty University at night was howling and bit deserted, which made me possible to sympathize with The Little Match Girl. But the feeling was a bit different from lonesome, or rather, awe-inspiring.


Let me show you some pictures of foggy silent street on Christmas Eve. These seem very normal pictures, but I believe that some of you who know the usual crowded condition around this area can see the weirdness. Just for your information, It’s around 6pm, not in the midnight. 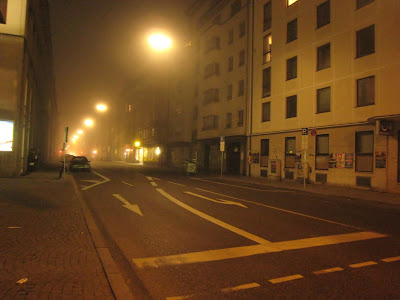 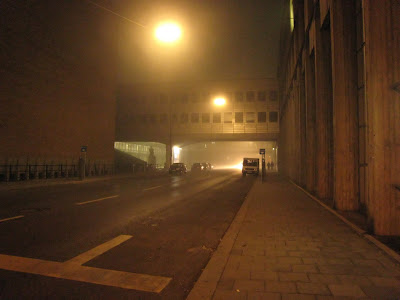 Christmas of course, marks the birth of Jesus Christ. Unlike Japanese one, even frightening German Christmas atmosphere gives me a feeling that something supernatural may happens.

The excitements and gorgeousness of Christmas markets and beautiful Christmas illuminations with historical buildings are very fantastic here, but furthermore, the “still” from Christmas Eve to 26th is really amazing actually. Yeah I know, even if there is a special “St. Nikolaus day” on 6 December in Germany, this quietness is an extra present from Santa Claus for doing my work.


Anyway, though it’s a bit late to say that, wherever you are, who(what??)ever you’re with, and whatever your mood is, I just hope you’re having fun and enjoyment with a happy X’mas!